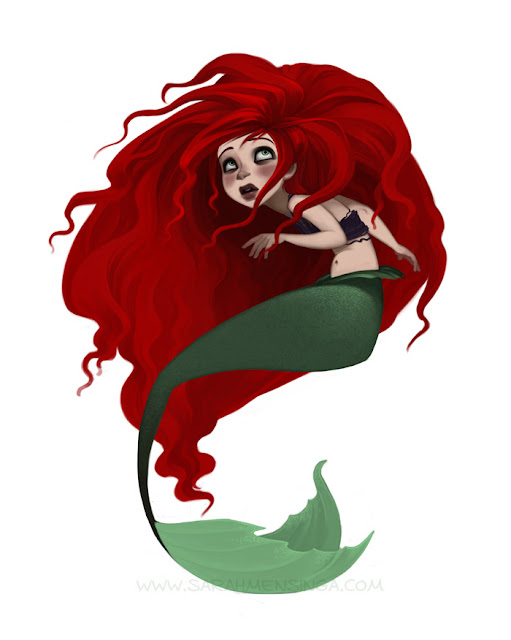 I haven't posted a painting in a while, but I actually have been painting a lot since last summer doing freelance concept design. It was fun to sit down to paint this and realize that all that freelance work has upped my confidence when it comes to digital painting. I've done digital paintings that I've liked in the past, but I always felt that they were 20% deliberate design and 80% unpredictable blind luck. I felt entirely in control painting this. It's so nice to be at that point.

Two revelations that have helped me paint better...

The first: Chop the painting into a few (but not too many) logical layers. In this case, I worked with half of Ariel's hair on the top layer, her face and body on the middle layer and the rest of her hair on the bottom layer.

The second: This one might be a little more complicated to explain. But here goes... and I stole this theory in part from someone at DNA Studios, but I can't remember who now. I'm sorry!

Think about the world in terms of shape, flat color (which can also mean various shades of black and white in something monochromatic) and volume (shading within a shape to make it seem more three-dimensional). Then make two of those elements more pronounced than the third. In this case, I'm focusing on shape and color. I've kept my shading to a minimum.

It would be so fun to see a remake of some of Disney's classically animated films. I know, gasp, hand to heart. But hear me out... I adore classical animation and the original films are of course beautiful and breathtaking, however, we all love seeing a beloved story retold in a new way. Who doesn't like going to see another Batman movie? :)

Fanie.ca said…
This is a beautiful digital painting. :) I love all the little details in your Ariel, her hair, the scales on her fishtail... And I love how you change her top, it looks very modern.

Jez Tuya said…
This is beautiful, Sarah! And great advice on digital painting, too. Sometimes I get carried away with how many layers I have and keeping tack of them is a bit of a pain :S
11:30 AM

Craig Phillips said…
Yes, it is a lovely design. I really enjoy your work. It is always great to see a new post from you!
11:37 AM

Charles Eubanks said…
Gorgeous, as always! And FWIW, I love your older digital paints as well. Great to learn new stuff!
11:42 AM

Kendra Melton said…
Before i even read the post, i was like damn that hair looks awesome, then you talked all about it haha. Real nice painting. I know exactly how you feel though about the painting kind of running away with itself and it feeling like it painted itself instead of you deliberately doing it. I feel like that a lot. I'm sure practice would help. Glad to hear that feeling can fade :P
11:55 AM

sarah said…
Thank you very much everyone!

I don't know if I'll always feel as confident with every subject... I do draw a lot of mermaids. But I feel like I have a more reliable approach to painting now, rather than one that changes every time I paint.

I'll also admit that it was three main layers, with a few extra layers for texture, such as scales and hair highlights. :)
7:50 PM

Jules said…
Hello Sarah
First of im sorry for my English, its not my first language.
Second , amazing paintings, really.
That why i was wondering if you take on work?
Im looking for a artist for a tattoo, and i want to ask you for the help.
Is there any way to contact you more "private" ?
If youre up for it..
Regards
Jules
1:15 AM

I do have my email listed on the contact page of my website, www.sarahmensinga.com. However I'm unfortunately not available for tattoo design commissions right now. Thank you for your interest though!

If you get a chance stop by my blog.. rcreesestudios.com
5:59 PM

sarah said…
Thank you. :)
And I don't have a deviantart account. Too many accounts as is!
2:00 PM

Giuseppe Bianco said…
I'm blown away by your interpretations. You are extremely talented.
7:03 AM

Donna said…
Just discovered your blog and I'm glad I did! Amazing!
10:24 AM

The Wise Serpent said…
So glad I've been checking out your blog! I really love your artwork, and it's fascinating to read about the process behind it all.
10:05 PM

sarah
I'm an artist and writer located in Texas. Find my novel, Currently & my picture book, The Box, on Amazon.