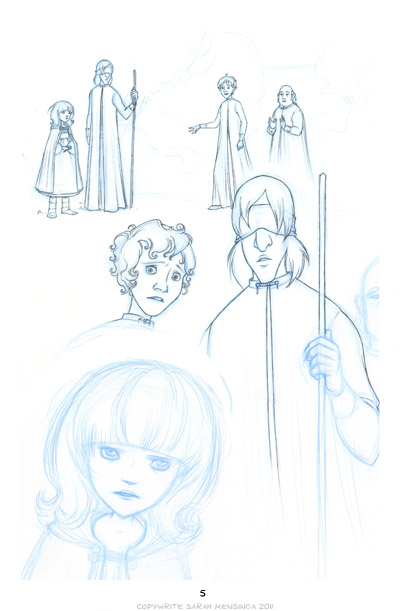 Don't pay attention to this first version of page five. It's horrible. But my post makes the most sense if I start with this image.

Last week I was really lucky to hear Glen Keane speak. If you don't know who Glen Keane is, it would be worth your while to do some googling. He's the incredible talent behind many iconic Disney characters and his beautiful artwork has been a huge inspiration to me and many many other artists.

After Mr. Keane's talk, my husband asked me how it went and I said, "Meh."

At first I couldn't pinpoint why I was disappointed, I mean, Glen Keane did a great job speaking. But then I realized that a silly part of me thought that by listening to one of my art heroes speak, some of his awesomeness would rub off on me and I'd be magically transformed into a better artist. And another equally silly part of me thought I'd leave that lecture with some powerful art secret I never knew before. Ridiculous. I know.

But as the week's gone on, Glen Keane's talk keeps coming to mind; things he said and things I observed about his work. Much of it is stuff I should know, or used to know when I was fresh out of college, but somehow got lost along the way. So thanks from the back row, Mr. Keane! And since one of his points was how important it is to share what we know with other artists, here goes:

- Think of your line drawing as a three-dimensional sculpture.
- It's all in the eyes.
- If you're not satisfied with the first drawing you do... redraw it. And then redraw it. And then redraw it, pushing the pose, the design, etc, until it's as awesome as it should be. I used to do this a lot, particularly when designing characters for people. But for some reason it never occurred to me to approach comic pages the same way.
- As long as you understand how something is built, you can draw it.
- Ebony pencils pretty much rock.

So... above is the artwork for page five of a comic I've been working on. I did this artwork several months ago, tried to ink it by hand, loathed it, and then inked it digitally, which although it's better, it's still stiff and soulless; 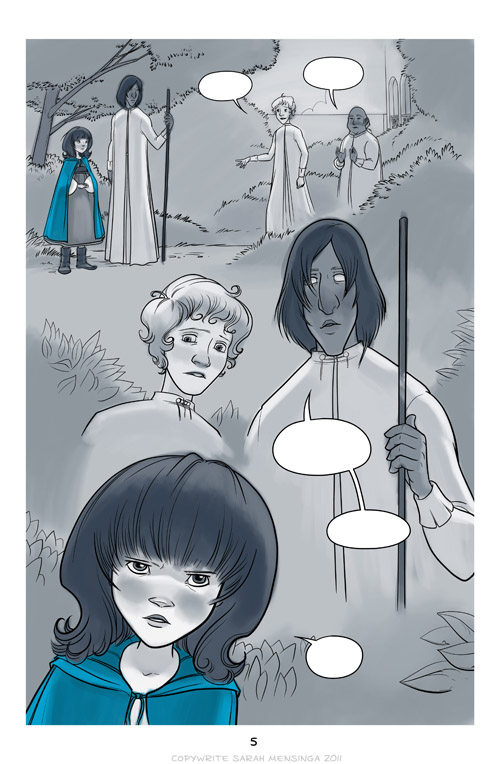 Yesterday, thinking about Glen Keane's talk, I decided to dig a bunch of ebony pencils out of my dusty art supplies and apply some of the things I learned to my comic. 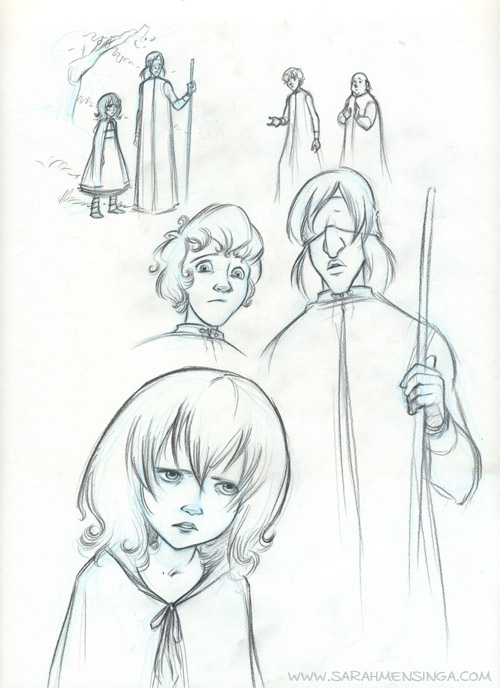 Since I was using that first image as my reference and haven't worked on this book in months, I forgot that I got rid of the blindfold... but you can see that I'm thinking about the characters more three-dimensionally. And since I knew I could redraw the page if I made a mistake, my line work is bolder and more confident. 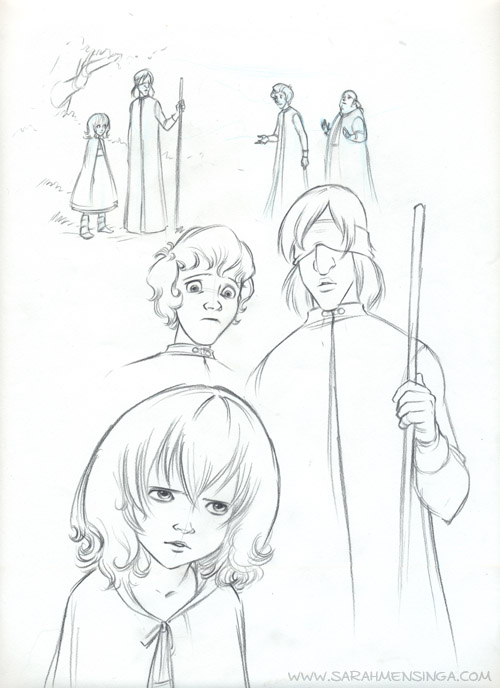 So here's another take on it. (By the way, if you'd like to do this kind of workup to your art, semi-translucent animation paper is a good way to go... I recommend chromacolour. Vellum will also work or a light table.) You can see here that the top panel is getting more interesting, the acting is stronger and I'm figuring out the best way to use my lines to express volume and shape. However, her hair is still weird there at the bottom, and I realized I forgot to take that blindfold off! Argh! 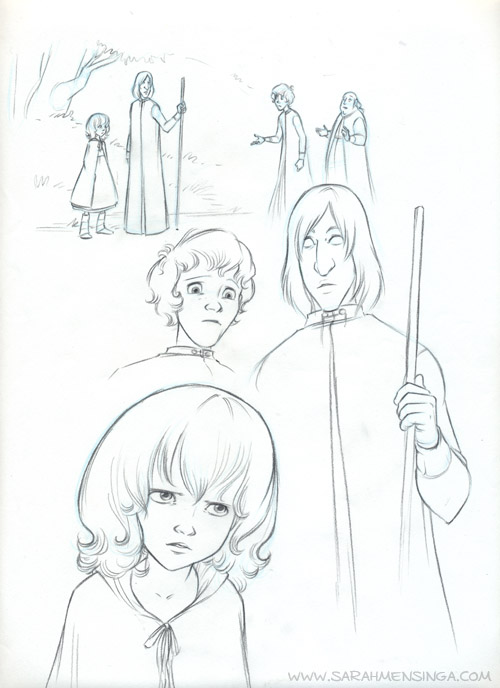 Round three! Or is it four? His blindfold is off, her hair is better and the lines are nice! The group up top is far more expressive that I originally drew them and they have some great descriptive shapes too. But, taking that mask off the blind guy has made him worse, his hair is too flat and his right eye is too high. I also think that the girl's hair is maybe a shade too big. And the dialogue she'll be delivering has menace, so she looks too sweet. The line work is also getting too clean... and for me, clean generally means stiff and blah. One more try! 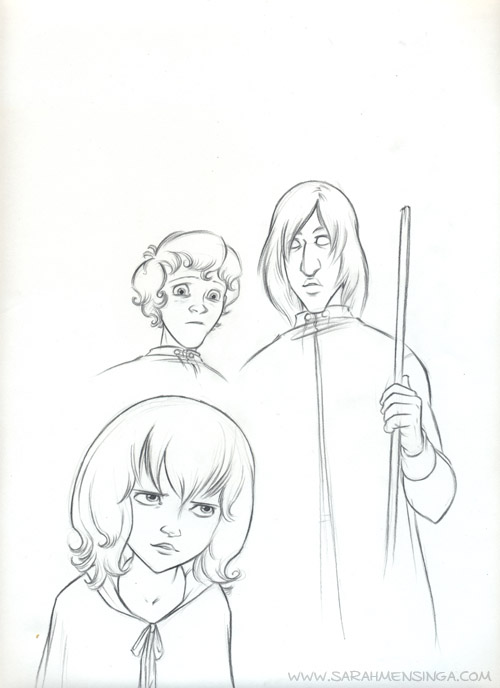 I thought the top group was working well enough, so I left them out. The blind character's face is better, the girl's expression is more appropriate to her dialogue and everyone's hair has improved!

The only thing I still might change is technically the girl should be looking more to camera, like in the original drawing. But there's something sinister about a sideways look and what she's saying is fairly grim, so we'll see.

By the way, all these ebony drawings took me about two/three hours tops, and half of that time was spent keeping track of an active toddler. That's FAR faster than either of the first two drawings.

Sarah said…
Great little post, I loved seeing your in progress sketches! It makes me want to bust out the pencils and doodle. They're always more lively than when I draw them digitally. I dunno if ebony pencils are different from graphite ones, but this was a real informative post either way. Thanks!
9:01 PM

sarah said…
Thanks so much, Sarah! Ebony pencils aren't really that magical, but they don't seem to smudge as much as graphite does and are soft, but still seem to let you get some fine detail in.

By the way, I'm totally enjoying your book! I love what's happening with Hedda and Coal!
9:24 PM

Eric Scales said…
Great stuff- I think all your characters are so well designed, but I do see even more solidity in them as you refined this page. And I like that you brought the two gentleman in the upper right a bit closer together, makes them seem to relate better- the original had that whole upper row of characters very evenly spaced.

Glen's pretty much my hero too- always great to hear his thoughts, though I've never been lucky enough to hear him in person. But redrawing and the freedom to redraw is such a great thing- I was just talking with an artist friend about how when you're a kid, you kind of just take one shot at a drawing, and if it doesn't succeed, you just move on. And you remember that it didn't work so you mentally label it as something you can't draw. Nowadays, thanks to much eventual success, I know that if I just try 2 or 3 (or 7 or 8 ) more times, eventually I'll get a drawing right, I've never not succeeded as long as I've kept trying- what a valuable lesson for anyone.
12:48 AM

Tim Hatcher said…
Excellent post, Sarah. Having attended Glen's lecture, it's great to read how an artist put his ideas to work. And studying your different versions of the same figures it's clear how line quality affects the perceived personality of the characters. Enjoyed seeing you again at the lecture!
4:30 AM

Kent said…
Wonderful post, Sarah! Your work is so good to begin with, but its really cool to see how being inspired pushed you to push yourself even further.

(I actually like pencils that smudge a lot, maybe because after all those years doing tight drawings in clean up, a higher smudge factor loosens me up, ha ha...)
8:16 AM

Gerardo Delgadillo said…
Hola, Sarah. Knowing nothing about drawing, I saw the progress in your sketches. I've always been impressed with your artistry, but this is great!
8:33 AM

L Rossi said…
Very interesting :)
I think there are benefits to both ways of working.
You're right to push a drawing, but sometimes re-doing a drawing could lose the orginal intention the further along you go.
But with these panels there's a huge improvement from the first to last!
Hope you're well!
8:36 AM

Joanne Roberts said…
Glen is everybody's hero, right? Anyway, I like the quality of the line in your later drawings, whether it's the pencil or the confidence. Also I agree about changes to the girl in the foreground. I loved the original look on her face as she looks forward out of the picture plane.
7:28 PM

RadeoFlier said…
SO THRILLED for a new post!
9:39 AM

-loose-lines can add more feeling
-ebony pencils
-redraw strategically until happy
-2-3 hours per page is a decent amount of time (I always wonder if my production time is on par w/ others...)

sarah said…
Thank you everyone for the thoughtful comments. It's true that this isn't always the best way to work, nor will I always draw something over and over and over again. I think just knowing how easy it is to redraw something, knowing I have that safety net, is a great way to stay loose and confident right from the start.

If anyone else has worked up a drawing like this and posted it somewhere, let me know, I'm curious to see the results. :)
10:55 PM

AJ said…
those tips are great thanks for posting them.
1:25 PM

sarah
I'm Sarah Mensinga, an artist and writer located in Texas. Find my novel, Currently, and my picture book, The Box, on Amazon.